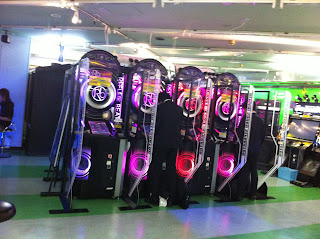 I played it at Akihabara's Taito Station Arcade,
I was curious as to what kind of game it was. 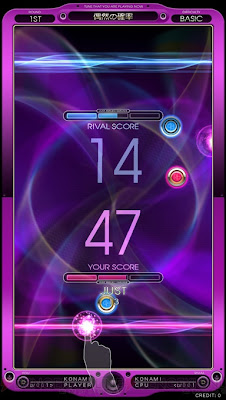 It's basically like any other music/Rhythm game, you hit notes.
But the visual layout of this game is similar to those table hockey games-
just that a ton of pucks come at you instead of one.
Each puck comes at you according to the Rhythm of the music, and you "Reflec" it back like you would in table hockey. Simple as that. More points for getting it on beat.
Basic levels are just normal reflec backs (notes) and hold pucks (hold notes)
Normal level advances with double notes, an multi-touch requiring the use of more than two fingers at once.
I can see how this would be a great iPad game, the entire interface is on a touch screen panel! It felt like an iPad at the get go. (just thought I'd bring up my opinion on this, since it was one of the first things that came up when I googled this game)
The harder levels were rather difficult, but I had fun on my first try. It'll go on my to play list along with DDRX2 and Jubeat Ripples. :)
Posted by Kxela at 12:03 PM