I have a mild interest in figures so I thought It'd be pretty cool.
Here is my Figure list site:
http://myfigurecollection.net/profile/Kxela

These will help me, especially the anime one cause I have no place that I've written all the shows
I've seen in the past, it's all in my head. And I've watched quite a lot over these last several years.


Anyways, back to work. More Comiket Info soon.
Posted by Kxela at 1:29 AM No comments:


...Well after all the insane hassle of sending in the application (Equally hard as filling out tax returns and college financial applications) Then Waiting two months, and then finding out nothing was delivered (both the confirmation card nor the results package) and then using my brain to guess my confirmation number (where we rejoiced because I found out I actually made it, at the same time being super pissed because there was no excuse for the not to have sent anything if I was ACCEPTED), and then battling with the post offices (took me couple days ) to send the "undelivered/Resend mail application" to Japan (which cost me some via express mail)....


ALL MY EFFORTS ARE PAID OFF when I got one phone call this morning telling me I finally got those golden tickets to Comiket delivered to us.

NOW I gotta work my butt off to get my books done! lolololol


I gotta also talk with the couple of you that might come with us this time.
This'll be the first time I go to comiket with other people so, it'll be something.
Posted by Kxela at 7:25 AM No comments:

please tell me I'm not dreaming.

So one final attempt to find out if I made it or not-
I used the Comiket's "Circle registration information and information retrieval systems"
at circle.ms

...wait, I couldn't have, since I never got that darn postcard in the mail that has my confirmation number on it.

The form required four things as a password-
the confirmation number, the registered phone number, my birthday, and my registration number. The other three I had. So what'd I do?

I GUESSED. EVERY painful number between 1000-6000 (actually I figured out it was only up to 1619- or around so by using the "that is an invalid confirmation code" message and "you've entered the wrong information for your confirmation code" message.)
I learned somewhere that the first three digits were the genre code I choose.
.
.
.
.
yeah I know. but i had a RIGHT to do it. and it was WORTH EVERY MINUTE.
now I need to make sure to get that packet of WIN delivered to me NO MATTER WHAT.

I would be crying right now if my body weren't in such a disbelief mode.
Posted by Kxela at 4:07 AM No comments:

I really don't know what went wrong, but nothings been delivered to me from the Comiket Volunteer Committee.. No postcard, no results package. Appearantly if I didnt recieve the postcard I was to send a notification within ten days or forget about it.
-_-

Still trying though. You must be bored to hell with this stuff unless you have plans to go...
I swear though, next time: Online Registration. And I'll make sure to stay in Japan til I get everything settled.

sigh. Well I guess I can go back to blogging normally. Maybe news will pop up.
Thus ends the tale of a small circle that never was.

I need to find better friends/associates to help me with this registration crap.
My relatives and such were not much help at all. Geeze.


On a brighter note, I can start playing Pokemon Heart Gold again soon. I just stopped playing for a while...just cause. Also we ordered Silver for my brother so we can play together.

Also been playing Need For Speed Underground 2 for Gamecube on the wii. Something made me go out and by Need for Speed Carbon for the wii. Pretty cool game, territory nabbing by winning races. Also has police chases (lota fun) and this crew member system. yeah I know OLD GAME, but new for me cause I just bought it. It was actually still 30 bucks used. What I really wanted was Need For Speed Most Wanted for GC, but unfortunately GAMESTOP had rid of their Gamecube section entirely leaving me no option but to find it online in the future if I still want it.

But yeah. o_-
Still working on the freelance project.
And the Touhou books I might not get to sell at Winter comiket. Sigh. ANyways.

here's a picture of Youmu I drew to break this wall of text: 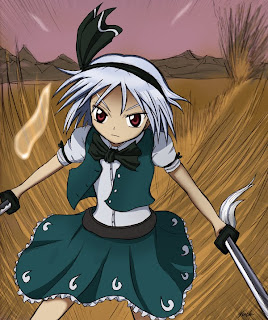 Anyways, I'll be going down to Ft. Lauderdale tomorrow to hang out with my friend who'll most likely be graduating from AIFL this quarter.

...Besides that I dont have much to inspire me anymore.

I've been using that emote alot. it's pretty much describes how I feel now.

The weathers gotten nice and a tad bit cooler here in Florida, but might just be the effects of Hurricane...Ida? was it? passing by going up the gulf. No storm here, just lots of wind.

k the end, cya next time~

Yay AGAIN for me NOT upgrading my original DS YET.

new later this month in Japan and next year for US, We're getting a new DSi.